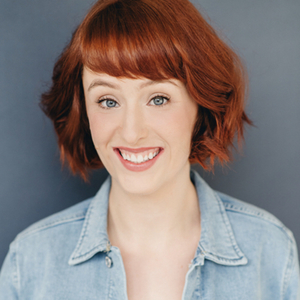 Clare Blackwood is an award-winning Toronto-based actor, writer, and comedian, and a graduate of UofT/Sheridan College’s Theatre and Drama Studies program.

She is an alumna of Second City’s Sketch Conservatory, a Second City Tim Sim’s Encouragement Award nominee, one half of sketch duo Whisky Kids, and a member of Toronto’s all-star sketch collective The Wow, with whom she has performed in sketch comedy festivals across Chicago, Philadelphia, and Toronto.

Clare’s first solo show, BikeFace, by Natalie Frijia, was a part of the Toronto and Hamilton Fringe Festivals in 2018, where it was named Best of Fringe in both cities and garnered her nominations for both BroadwayWorld and My Entertainment World solo performance awards. Other recent theatre credits include Katie (Welcome to the Bunker!, Toronto Fringe), Cathy (The Last Five Years, Rural Stages Productions) and Olivia (Twelfth Night, Dauntless City Theatre).

When not on stage, Clare is a writer for Canada’s foremost satire website The Beaverton, and has also been published on McSweeney’s Internet Tendency, The Belladonna, The Weekly Humorist, Slackjaw, and Points in Case.

1 episode of the Smashing Security podcast: